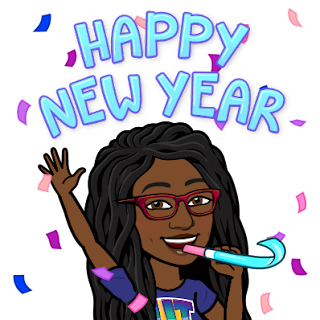 Happy 2021! Although 2020 was a tumultuous year, I am excited about what 2021 will bring. I stopped creating New Year's resolutions some years ago and instead focus on obtaining goals for each year. Having said this, here are my list of goals to achieve in 2021:
at January 02, 2021 No comments:

Each year, I take on different reading challenges as a way to get outside of my reading comfort zone. For 2021, I plan to complete the 2021 Popsugar Reading Challenge which contains a total of 50 books as well as the 52 Book Club Reading Challenge.

Below is a list of reading prompts for the 2021 reading challenge. After I finish each reading prompt, I will update this list. If you want to see more of the books I've read this year, you can check out my Goodreads profile at: https://www.goodreads.com/user_challenges/15431036.

Each year, I take on different reading challenges as a way to get outside of my reading comfort zone. For 2021, I plan to complete the 2021 Popsugar Reading Challenge as well as the 52 Book Club reading challenge which contains a total of 52 books.

Below is a list of reading prompts for the 2021 reading challenge. After I finish each reading prompt, I will update this list. If you want to see more of the books I've read this year, you can check out my Goodreads profile at: https://www.goodreads.com/user_challenges/15431036.

Day four of election poll work was long but rewarding. My day started at 6:30am and before the polls officially opened at 7am, we set up tables outside the lobby area so that voter can have an area to complete voter registration paperwork. The lines quickly developed and stayed steady throughout the day. We stayed busy until after 8pm and the last voter left around 8:30pm. After the final voter left, we locked up the polling location so the inspector and all the election clerks could count the paper, electronic, and vote by mail ballots received that day. After the ballots were all counted, then we took down all the voting equipment before leaving for the evening. I finished the day happy to have helped so many people successfully vote, receive a pin for being a poll worker and hit my step goal of over 10,000 steps a day. 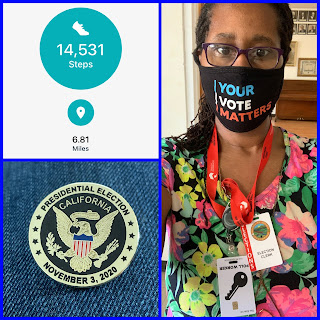 Day 3 of election work went well and flew by fast. We helped a variety of people on the last day of early voting and we were able to finish up before 7pm. Before we left for the night, the election inspector discussed with us a game plan since Tuesday is election day. 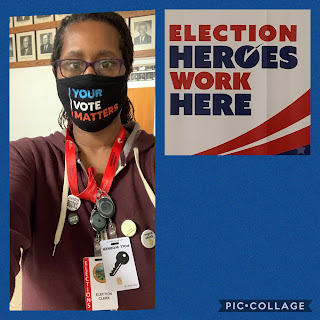 Day two of working at the election polls went well. We began the day by saying the poll workers oath followed by setting up signs outside of the poll location. I am stationed at the exit table and my job is to make sure all ballots are placed in the correct boxes as well as giving voters their I voted stickers if they want one.
One interesting thing from day 2 of election poll work were how many older people were registering to vote for the first time. I remember at least two people who told me and my table co-worker that they were voting for the first time at age 60.In addition, it was interesting to see the increased flow of traffic before and after yesterday's football games. Since Monday is the last day of early voting, I'm anticipating a larger more steady voter turn out.
at November 02, 2020 No comments:

In order to follow in the footsteps of my parents who have both served this country through by being in the army, I decided to serve this country by signing up to work as a election poll worker.
As someone who has voted in Kings County before, I thought that election poll workers jobs are easier since everything seemed so effortless whenever me and Den go to vote. I was so wrong and I was totally blown away by the amount of information poll workers have to learn prior to election day.
Before committing to be a poll worker for this election, I had to be available to work a total of 4 days in order to meet the needs of those doing early voting before election day on November 3rd. Earlier this month, I had to attend a mandatory training and at this training, I was given a 91 page handbook full of information on the different types of voting, how the various election machines work as well as how to open and close the election polls.
In preparation for working at the election polls, I purchased a mask with a message meant to inspire voters who come to my polling location.
Today was the first day of working the election polls and I will admit, I didn't know what to expect. Would my fellow poll workers be friendly? We we get along well? Would voters be respectful? Before  arriving at the polling location, I said a prayer and hoped for the best, viewing this as a learning opportunity and planning be a good team member.
Poll workers are also referred to as a election board and consists of one election inspector and eleven election clerks. The election inspector is responsible for making sure that everything runs smoothly at the polling location. Luckily for us, for the first two days, we have an employees from the elections department to assist with any complicated questions or situations that occur.
All poll workers are required to arrive at the polling location thirty minutes before the polls officially open to the public. During this time, we turn the electronic (aka touchscreen) voting machines on, turn the on the ballot by demand (aka paper option) laptop and printer, and set up signs inside and outside the polling location so the public knows where to vote. After this process is complete, the clerks what area they want to work at: the registration entry table, the print by demand table, the voting direction area or the exit table.
Polls officially opened to the public at 9am and for the first day, we had a steady stream of people coming in the vote. It was encouraging to see so many people coming out to vote as well as the amount of people who thanks us poll workers for being there working.

Happy 2021! Although 2020 was a tumultuous year, I am excited about what 2021 will bring. I stopped creating New Year's resolutions so...